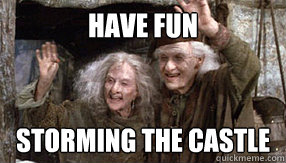 Now is the time to put everything the protagonist has learned to the test. To keep the tension high throughout the final act, the plan of attack has to hit a snag. For instance, Frodo and Sam make it all the way to Mordor, only to find that the power of the ring is so great that Frodo doesn’t want to give it up. Blake Snyder is famous for demystifying storytelling for screenwriters, and recommends a five-step finale. Using a classic “storming the castle to save the damsel in distress” scenario, he says to do the following (Source):

Step 1: The hero, and the hero team, come up with a plan to “storm the castle” and “free the princess” who is “trapped in the tower.”

Step 2: The plan begins. The wall of the castle is broached. The heroes enter the Bad Guys’ fort. All is going according to plan.

Step 3: Finally reaching the tower where the princess is being kept, the hero finds… she’s not there! And not only that, it’s a trap! It looks like the Bad Guy has won.

Step 4: The hero now has to come up with a new plan. And it’s all part and parcel of the overall transformation of the hero and his need to “dig deep down” to find that last ounce of strength (i.e., faith in an unseen power) to win the day.

Step 5: Thinking on the fly, and discovering his best self, the hero executes the new plan, and wins! Princess freed, friends avenged, Bad Guy sent back to wherever Bad Guys go when they are defeated — our hero has triumphed.

The protagonist may be victorious, but the story isn’t over until they have found their way back to a State of Perfection (SOP). This is the “awww” moment for the audience, who gets a chance to catch their breath after the action of the finale. For our triathletes, it is also the best place to explicitly state the moral or theme of the play for the judges before they write down their scores.

Let’s go back to the original SOP we discussed in the post about beginning a story. A group of Wilderness Scouts were gathered around the campfire. If the misfit protagonist was the only member of the group having a good time, the audience needs to see them back at the fireside. However, they can’t be the only one enjoying the camp-out anymore. The rest of the group would need to either gain an appreciation for the great outdoors thanks to the protagonist’s influence, or the friendships they forged must be strong enough to overcome their own misgivings. On the other hand, if the protagonist started off in a State of Imperfection and hated everything about the wilderness at the beginning, the audience would need to see how much they’ve changed as a result of the story.

In other words, the final image needs to have some connection to the opening image, and is often a mirror (be it fun house-style or just a normal one). This brings the story full circle, and leaves the audience with the feeling that all is right in the world. For a P.A.R.T.Y. in a Box skit, this is the perfect time to tell the judges the moral of the story to drive home how the team has come to understand and illustrate the theme. Plus, it’s the last opportunity to really “wow” them with a special talent or comedic relief. The old showbiz adage of “always leave them wanting more” couldn’t be truer! Judges often adjust their scores after they’ve seen all the shows in order to make sure the scoring is fair. If the story ends with a bang, it’s much easier for them to remember what they’ve seen, even if a team gave their performance at the beginning. So, don’t forget to make it memorable!

Read the rest of the Elements of Storytelling posts for more info about structure, and check out the rest of our P.A.R.T.Y. in a Box tips.